One year on: my journey to RichRelevance

My one-year anniversary at RichRelevance is fast approaching and I’m starting to worry what my bobble-head might look like. This traditional first birthday present for RichRelevance employees will be an action-figure-sized, 3D resemblance of me, likely sculpted in some amusing pose that characterises how my colleagues see me. Absolutely no need to worry there then.

It’s hard to believe that 15+ months have passed since I first set my sights on RichRelevance during the search for the next phase in my career. Cue wavy flashback sequence…

In May 2011—perhaps not coincidentally around my 39th birthday—I decided to move on from a job I was no longer happy in. While factors such as salary, benefits, job title, location and career opportunities naturally influenced the decision, what trumped everything was an overwhelming desire to re-discover satisfaction in my job and to actually enjoy the company, people and place where I spend most of my waking hours.

Such a personal and emotional goal demanded that I adopt a pro-active approach, rather than putting my future in the hands of a recruitment consultant or job website. In fact, three of the five employers I’ve had over 18 years working in software professional services are companies that I’ve pro-actively targeted. Although it requires more thought and effort, it’s an approach that has worked for me.

The driving factors behind this move meant that I was very single-minded in considering both the kind of company and the role I was looking for. From a role perspective, I knew my strengths were in post-sales implementation and project/account management but I wanted to contribute in any way that could add value, and so was open-minded to any role that would enable that. My company criteria quickly distilled down to the following – independent, pre-IPO software-as-a-service vendors, with less than 100 employees, in a new and growing area within the sales and marketing sector, either with an existing small office or aspirations to expand into Europe. Having been through early growth years with previous startups, I found that although they were the hardest-working, most challenging and highest-pressure environments, they were also the most enjoyable and fulfilling. While such a focused approach does limit options, it enables you to concentrate your mind, your resume and your interview technique in a way that I think gives you the best chance when an opportunity that fits the bill comes up.

With pre-IPO startup being a key criterion, I started with a Google search for hi-tech venture capital investors. Included in the VCs I found were Greylock Partners and Tugboat Ventures. For each, I looked at their track record of investments as well as the portfolio of companies they were currently invested in. Then, for each company that were of interest to me (RichRelevance had by now popped up a couple of times), I dug to the next level, examining corporate websites, industry sources such as CrunchBase, as well as conducting broader web searches for news and social comment.

A new tool for me this time around was a premium account for LinkedIn. With this I was able to identify any tenuous links between company employees and my own network connections, as well as get a better feel for the type of people who had already chosen to work there. From my shortlist, I used LinkedIn’s InMail feature to directly approach the most appropriate contacts with my targeted resume and covering note. By this point, RichRelevance were at the top of my list and I contacted Brian Sprague, VP of Client Services, based in San Francisco and Darren Hitchcock, newly appointed VP of EU/UK Region, based in Reading, UK. The two-pronged attack clearly worked because I got responses from both and, before long, found myself meeting Darren in a coffee house in Reading that I later learned was effectively an extension of the RichRelevance UK office.

As the discussions progressed over the following weeks and the prospect became real (there was no budgeted headcount or defined role when we started the conversation), I also used the opportunity of Darren being on holiday to pro-actively reach out to another UK employee for an added perspective. By the time we got to a decision point in August, I had managed to meet or speak with all but one of the UK team and two managers in the US. In joining such a small and close-knit team, this was very important for both them and me. And the rest, of course, is history.

I’m pleased to report that being honest and realistic with myself about what I want from a job role and employer, focusing my search appropriately and pro-actively creating my own opportunities, has put me back in happy (work)place. Still anxious about the bobble-head though… 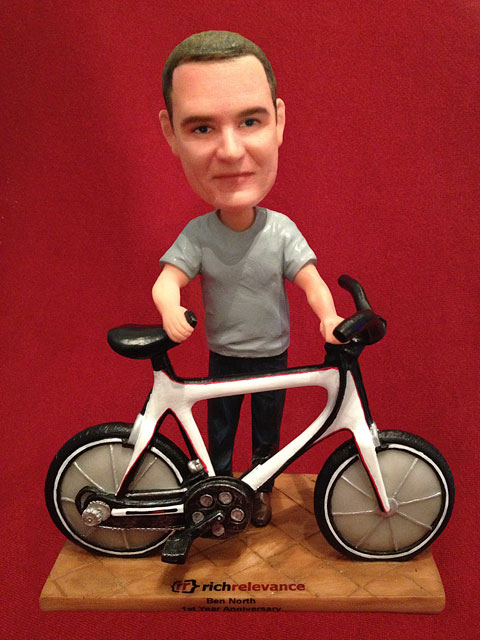